This Site Has Been Hit

History shows the MGRV8 was the last MG produced under British Ownership and must always hold a special place in MG History as being the last totally British MG.
At this time the Rover Group was still in British hands and owned by British Aerospace (Bae) 1988 to 1994.
After which it was the sold to BMW.


INTRODUCTION: ( A Classic British Sports Car for the Enthusiast ) 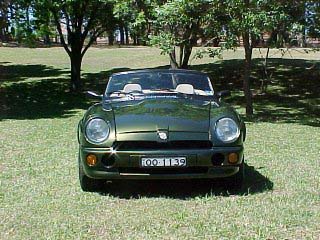 The MGRV8 was designed and built by Rover as a precursor to the planned arrival of a new main stream sports car the MGF.

The RV8 was always going to be something special, being much more luxurious and expensive than any of its predecessors. Rover planned and researched this vehicle with 3 main aims.
1. To bring back the MG name back before the public,
2. To act as a precursor to an all new MGF sports car.
3. Tto remind the public that the MGB had been the best selling sports car of all time.

Thus in designing and formulating the RV8 it was only natural the MGB would play an important part in this limited production sports car and its influence can be plainly seen throughout. Rovers management also felt the MGB influence would be favourably received by the traditional MG owners and the MG faithful.

To cater for the modernists, the suspension and handling were updated along with the introduction of a modern fuel injected V8 engine and a 5 speed gearbox to provide exhilarating performance.

A Rover Special Projects unit, (under the code name of Project Adder') working on a very limited budget produced to their credit a high quality, luxurious classic sports car.

The flowing curves and bulges give the RV8 a modern purpose built profile which beautifully accommodates the powerful fuel injected V8 engine and larger wheels and tyres.

Before the release of the Adder Project the marketing men came up with MG RV8 explaining it fitted the Corporate Rover Cars.
Some enthusiasts also believe the “R” may also have been associated with “Rover”, “Roadster”, “Return” or perhaps “Revival”.
Whatever the reason all will agree MGRV8 instantly identifies this MG and it is easy to say and rolls of the tongue easily.
(Disclaimer: Information gained from David Knowles Brilliant book MG V8)

Rover was always keen to stress they only planned to build around 2000 MG RV8s and no more.
Basically their reason was two fold, to preserve exclusivity and because of the limited production and parts availability.

The idea of perhaps a re run or even a Second Series RV8 was discussed however the idea never got anywhere.

In any event Rover remained nervous of reneging on their promise of no more the 2000 RV8s, and the homologation and supply problems were undoubtedly a critical factor.


Back to the Top Menu

FEATURES AT A GLANCE:

Seating: is very comfortable and positive with loads of adjustment for all drivers except the very tall.

Controls & Switches: are well laid out and in easy reach of the driver. The instruments are easy to read being black with white figures.

Steering: is a little on the heavy side (no power) when parking but is light and direct when moving.

Handbrake: well positioned being easy to use and access, although some drivers may feel it intrudes into the drivers space.

Clutch: is perhaps a little on the heavy side, some female drivers may find it too heavy particularly when trying to engage reverse.

Handling: on good road surfaces the car is smooth and predictable. The steering and braking is direct and positive. However when travelling quickly on rough uneven surfaces the car does tend to be thrown off line a little by these undulations.

Performance: from the moment the engine fires up, the throb of the V8 starts your pulse racing. The power and acceleration (0  100kph in 5.9 seconds) is awesome. The gearbox is a delight to use with well chosen ratios. However despite all this power and performance the car can still be driven sedately with the V8 pulling smoothly in any gear.

Owners wish list: the inclusion of rear wheel disc brakes, larger fuel tank and independent rear suspension should have been included in a vehicle of this quality and price.

Summary: The MGRV8 is a true British sports car for the enthusiast – a modern MG classic in every sense of the word without any drawbacks - a car which begs to be enjoyed and driven.

Disclaimer:-
Some of this information was gathered from David Knowles Brilliant Publications